A Fashion for Mourning

One of the most enduring images of the Victorian age is Queen Victoria as the ‘Widow of Windsor’. Helen Rappaport, conference delegate and the author of Magnificent Obsession: Victoria, Albert and the Death that Changed the Monarchy (Hutchinson, 2011) tells us more about the commercial consequences of this fashion for mourning.

It always amuses me that in her widowhood Queen Victoria, a woman whose personal sartorial style was much derided in her youth, became the most unlikely of fashion trendsetters. When Prince Albert was alive she had always plumped for a rather conventional, outmoded style of dress. But during her forty years of mourning for Albert, she became a master of the most flamboyant protocols – turning the wearing of widows’ weeds into her own art form.

The year 1861 had begun with the court in deepest mourning for the King of Prussia. When he died, Victoria immediately donned her crape and sent out directives: nothing but black silk, bombazine and crape; black gloves, black collars, black flowers, feathers, lappets and fans and festoons of jet mourning jewellery were the order of the day at court. When her mother died three months later, Victoria’s hysterical grieving was a foretaste of things to come. The more extravagant her mourning, the more she felt it demonstrated her devotion, and as queen there were no limits placed on her right to indulge it. Further catastrophe followed when Prince Albert died on 14 December.

The universality of public grief that followed ensured that most people, however poor, donned some form of mourning for the prince, even if only a black armband. The world of commerce was quick to recognize the money to be made from this unexpected and unprecedented run on all things funereal. British manufacturing went into mass production of every conceivable kind of commemorative item: plaques, busts, plates, handkerchiefs, even special mourning tea sets – all bearing Albert’s portrait. The middle classes besieged the drapers and milliners shops to order mourning outfits for themselves and their children; so grief stricken were they that ‘people could not give their orders for crying’. In particular Jay’s London General Mourning Warehouse did a roaring trade, enjoying  sales never before seen in its twenty-year history.  Although general public mourning officially ended on 10 February, there was no let-up in what had become an ‘almost incalculable demand’ for mourning goods.  Victoria had already made it clear that she intended to remain in black until at least the beginning of 1864. This was not in itself exceptional, but merely emphasised an already existing code observed by many pious widows.  But such was the level of public sympathy for the queen that many followed suit and remained in mourning for longer – not just for the prince but, following Victoria’s example, for their own deceased relatives.
http://www.helenrappaport.com
Tagged 'Magnificent Obsession', commerce, fashion, Helen Rappaport, Jay's, mourning, Prince Albert, Queen Victoria, Royal mourning
Leave a comment
Research interests

In the first of a series of posts that focus upon the research of participants, Eoin explores the Scots National Monument to the Prince Consort, as part of his wider interest in the collection of sculptures that Queen Victoria commissioned after Prince Albert’s death.

The death of the Prince on 14 December 1861 was one highly significant in terms of the material culture it generated. Queen Victoria herself acquired and commissioned a large number of memorial works – in various media. These ranged from private mementos such as plaster casts of Albert’s hands to large public memorials in Windsor and elsewhere. The works she commissioned were paralleled by numerous public memorials. Within days of the Prince’s death, towns and cities across the United Kingdom and the British Empire began to plan public memorials. The Scots National Monument to the Prince Consort in Edinburgh’s Charlotte Square was one of four national memorials –the others were in Dublin, London and Tenby in Wales.

Begun in 1865 but not completed until 1876, the Edinburgh monument was the work of numerous Scottish artists – Sir John Steell, one of the foremost sculptors in Victorian Scotland, executed the equestrian statue of the Prince that surmounts the monument. As an art historian, one of my first responses would be to think about processes of production, from the type of stone used for the monument’s pedestal to the bronze casting of the equestrian statue, statue groups and relief panels. I would also think about the monument’s three-tiered representational scheme. At each corner of the monument’s base are four statue groups representing the various strata of Scots society – the Upper Classes, the Lower Classes, Artists and Scholars, and the Services. Inset into the statue’s pedestal on the next level are four bronze relief panels representing Victoria’s and Albert’s marriage (pictured), Victoria and Albert with their children, the opening of the Great Exhibition in 1851, and Prince Albert presenting diplomas. Surmounting the whole is an equestrian statue of the Prince as a Field Marshal. The intention here is clear: to demonstrate the Prince’s life, deeds and virtues, and to represent the community of mourning generated by his death. Yet, one of the primary aims of the conference is to encourage us to think about memorial artworks, objects and texts, not simply as artworks, objects and texts, but to think about the ways in which they might have functioned as part of the Victorian experience of grief and expression of mourning. We want to think about what these memorials mean in themselves, but also to consider how contemporaries might have viewed, engaged with and potentially found solace in them. 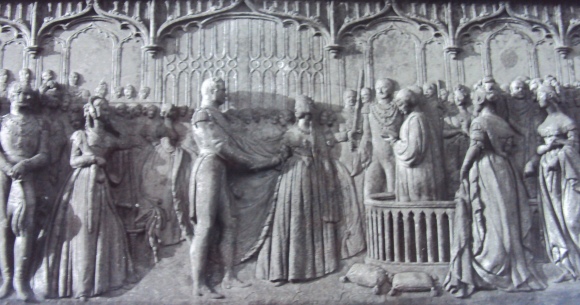